1. Creator coins will power future adoption of BitClout
Many have lost faith in the novelty that brought them here – social tokens called Creator Coins(CCs). The premise was both to invest in yourself and to get your supporters to invest in you. Couple that with a steep bonding curve and it seemed that money was being created out of thin air. But beyond the hype, the promise of BitClout is that the Creator Coin is supposed to represent “social clout” per the one pager. A creator’s successes and failures in theory will be represented in their CC price.

Summary of Creator Coin Utility (to be discussed in depth below):

Disclaimer: This piece is to outline CC utility and not to address all the shortcomings. Some of which are challenges with mixing monetary value and social value as well as using CCs for monetization. Remember, coin price should not dictate self-worth and that there are many different monetization strategies - Diamonds and NFTs are also very powerful.

Let supporters HODL “stock” in you and grant long-term access and benefits. Also, when did investing in yourself go out of style?

CCs are a long-term and less transactional way to bring supporters along for the journey. Don’t fight the current, normally a fan has a greater desire to HODL than their propensity for additional spending.

People came to BitClout in the early months of launch March/April 2021 because you could "buy stock in your favorite creator and allow people to buy stock in you". This is what social tokens do - they give supporters a chance to hold “stock” in all things that Creator does. Even if no direct cash flows from the CC the idea was that successes would increase the CC price and negative implications would decrease the CC price.

Creators could choose to share diamond income with coin holders and now with NFTs there is an automatic mechanism for this, coin holder royalties. There still is the challenge that many creators are making new accounts for their NFT projects and not sharing any earnings with their core coin holders. This can be a brand strategy decision but often not rewarding core CC holders could be an oversight but will ultimately lead to a rotation of investment to the coin with better CC benefits.

Remember there can be a lot of value in a unified supporter experience – it is about taking supporters on the journey. The recent Billboard article includes a statement from @jakeudell, “Udell quickly applied the concept to the music industry, imagining if he had invested in Billie Eilish's coin after attending one of her earliest shows. ‘That is an amazing, synergistic journey to be on with your fans, because

This is often an overlooked use case. This can be a superior choice instead of gifting $CLOUT. The first reason is that supporters should actually prefer to receive your CC if they want to be along for the journey and maybe your CC is scarce so this is the primary way to obtain(for example FR high or 100%).

The second reason is that a creator should be able to obtain a large portion of their coins early in the bonding curve at a reasonable cost such that later in the bonding curve the gifting is happening at a significantly lower cost basis or the creator can be more generous.

@Fungibles knows how to do this. The post below shows @Fungibles was able to give away about $800 worth of $Fungibles at a fraction of that cost. Using data from @bitcloutsignal this giveaway cost @Fungibles about $21 using a blended cost basis. So that can be viewed as about 2.6% of the cost of giving the equivalent amount in $CLOUT or 38x the “giving power”. 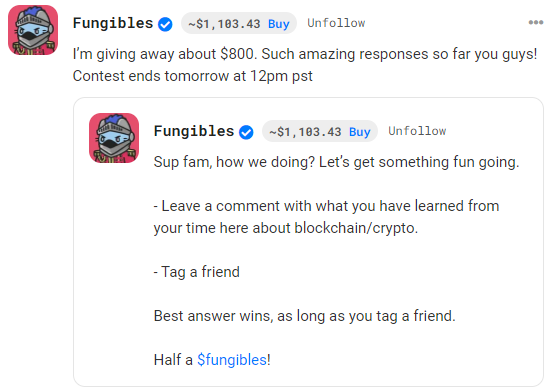 Even if a creator did not initially buy enough coin it still makes sense for them to purchase their own CC at any time to gift later since they should believe its upward trajectory (as a result of belief in themselves – the “invest in yourself” concept). This is a positive signal to supporters and will also increase the likelihood that they will HODL any of the CC they are gifted.

This means that you could borrow $CLOUT with your own CC or other CCs you hold as collateral (thus your coin holders can borrow against your CC). The interest rate will likely depend on the “credit worthiness” of your CC. That means that metrics like CC lifetime, transaction history, and volatility will be used to set the interest rate.

This furthers the concept of “social clout” as an asset class and incentivizes maintaining a good reputation as this will lower the cost of capital. And since the CCs of creators with the highest reputation will have the best metrics, when used as collateral they will also lead to the best interest rates. This is a way in which investors will decide to hold one CC over another. Just like choosing which cryptocurrency to hold based on staking rewards or deposit APY.

This functionality is not here yet but we are highly confident that this will be possible. If someone doesn’t build this, our editor @darian_parrish will.

The CC cap table is also useful for ranking fans by their level of support. Let’s take a look at an example of how this is useful. If @reade receives too many BitClout hats and doesn’t have a place to store them – how does he decide how many to give to each of his supporters? The easiest way is to multiply a coin holders percentage ownership of $reade by the number of extra hats. If I own 10% of all the $reade supply and if he has 100 extra hats, I would receive 10 hats. These types of giveaways by percentage ownership incentivizes supporters to keep upping their investment in $reade to increase the benefits they receive.

Furthermore, who are a creator’s super fans? The top 5, the top 100, the top 500? Whichever one you choose you need a way to rank the fans. Super fans might get exclusive benefits like DM access or in-person meetings.

Again, we want to acknowledge there could be a more holistic methodology to correctly rank supporters or identify superfans that considers other forms of support like all engagement metrics(likes,comments, reclouts) and other financial contributions like diamonds. Who is going to build the best tool to classify superfans?


Potential topics for next week:

Post on BitClout and tag @CloutTrends to let us know what you want to read about next week. Also, please reshare if you like the edition or post any snippets with attribution. Spreading the word helps us continue to operate since we are 100% funded through FR.