On the third day there was chaos. New features abound and use cases rapidly unfolding. Then quietness set in as only the core BitClout believers were able to digest the changes. The calm before the storm… and then BitClout goes mainstream and democratizes social media!

1. Creator Coin transfers enabled
This is simply the ability to transfer any creator coin from one’s wallet to another user via their public key or username. It doesn’t have to be one’s one coin, any owned coin. This is a very important growth enabler for BitClout. This allows for tipping, splitting income of projects, payment without selling and much more discussed in detail below.

2. Embedded video
You can now embed video in a post by way of a Youtube or Vimeo URL. Thus there is no hosting on BitClout which makes sense from a technical perspective but makes it more difficult to quickly record and post a video.

3. Is BitClout ready for mass adoption?
There has been much experimentation with different use cases and topics. However, there is yet for major topic groups to emerge like there is on other social media platforms, for example, “FinTwit” or Financial Twitter. Some have speculated that this is part of the reason for recent declines in user activity. But this is normal when iteraterting quickly and people need to to regroup. The rapidly growing ecosytem of BitClout projects will soon revive growth.

Creator Coin transfers fortunately unlock many new uses of BitClout… but also unfortunately there are some uses that are less desireable.

Here are some ways that Clouters have mentioned they anticipate using creator coin transfers:

Positive transfers: As with all content I write, it is thoroughly researched so I executed some transfers to give you the scoop. First one was outbound where I sent someone their own coin I had purchased. The second transfer was inbound where said individual sent me the coin of a creator they thought was interesting and that I would like too. This second transfer represents the last use case bulleted above.

Negative transfers: There is enough Chlamydia in the real world. Do we really need it on BitClout:

Yes, someone tried to digitally transmit Chlamydia to me.

Read for yourself what their profile claims as the intended mission:

The normal etiquette for receiving transfers you don’t want is to send it back. In this case if you want to slow the spread just sell it.

There is many concerns around these type of transfers since the transfer is automatically accepted and does not need to be approved. Another of example is sending your coin to a user with a lot of clout to try and imply they support you. This false implication could lead to some concerning trends on the platform but for now the best solution is to not read to deep on what coins one might hold and instead look at who they follow.

Embedding videos is great but do I really need to upload to Youtube or Vimeo first?
Simple answer is yes. This is not a big deal if your intended usecase is sharing videos that are already hosted. For example, the Wikipedia founder gave it a try:

Well that is sort of underwhelming. I can do the same thing here:

This is a great starting point because most people count video as table stakes. But lowering the friction further for short form video engagement would be of huge benefit to encourage adoption.

BitClout is ready for mass adoption due to recent feature parity, but are the people ready?
Without going into the psychology of behavoir change, the question is do people understand how to use BitClout and is it familiar enough to make the switch. And these are likely two different notions. Also, we don't need to get to mass adoption yet since it is still early days and there are still millions of early adopters that have yet to join(remember the segments on the Technology Adoption curve from the first edition).

But there are already great tools to help you navigate Bitclout.

The first is @bitclouthunt which shows you all the top projects being built on BitClout:

One of these important projects is @bitcloutfollow. It helps people find their tribe. I think this is especially important until #hashtags or keywords are searchable and addresses the "topic group" concern mentioned in the TL;DR. 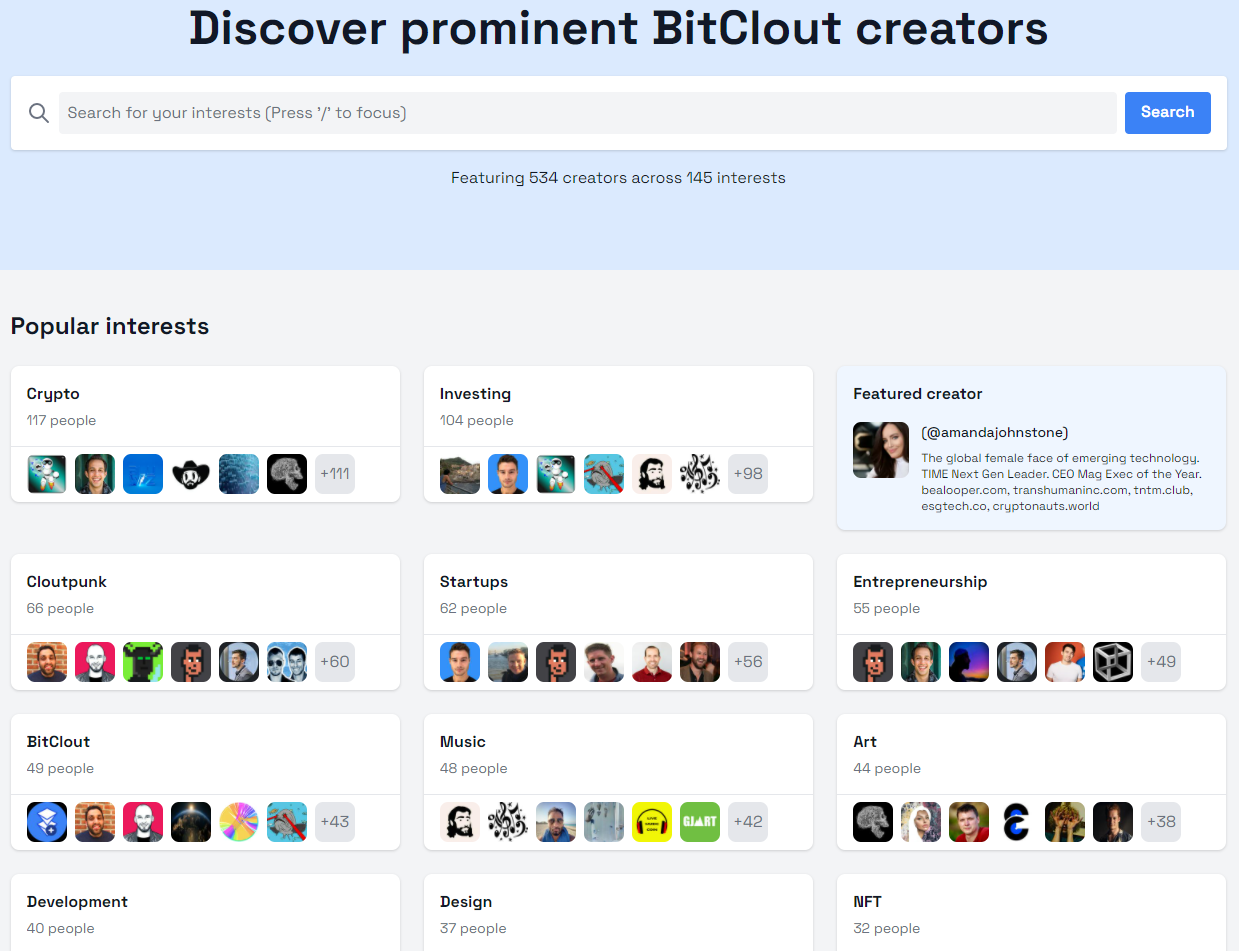 A final noteworthy mention, RE: Open sourced nodes from the last edition, is @cloutted. It is intended to be an alternative UI to BitClout.com. This is similar to using TweetDeck for Twitter rather than the Twitter App.

This could be a very powerful tailwind for BitClout adoption and I might do a deep dive on this in the coming weeks.

Post on BitClout and tag @CloutTrends to let us know what you want to read about next week.